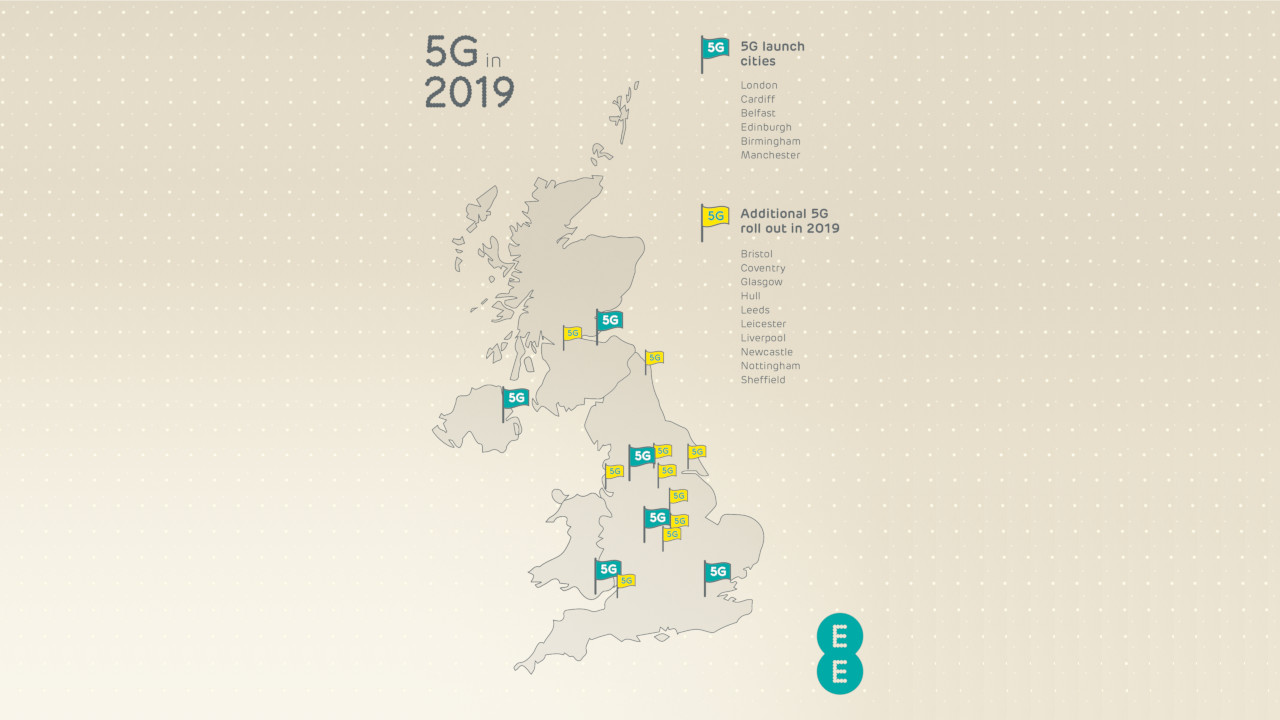 Communications company EE, formerly Everything Everywhere and now owned by BT, has announced it plans to enable commercial 5G cellular connectivity for smartphone and home broadband in 16 UK cities in 2019, starting with six of the company’s busiest network locations.

EE has named London, Cardiff, Belfast, Edinburgh, Birmingham, and Manchester as the launch cities for its commercial 5G network, based on internal measurements of traffic volume. Those measurements, EE has claimed, revealed more than 2.1 million users connecting around London’s Waterloo Station over the last three months, with one site at the station responsible for carrying more than 100 terabytes of data per day.

The initial launch will target 1,500 sites across 16 cities – the launch cities plus Bristol, Coventry, Glasgow, Hull, Leeds, Leicester, Liverpool, Newcastle, Nottingham, and Sheffield – found to be responsible for 25 percent of the network usage, despite having only 15 percent of the UK’s overall population. Each site will be upgraded to 10Gbps transmission links, the company has confirmed, following testing at trial sites in Canary Wharf and East London.

BT consumer division chief executive Marc Allera claims that adding 5G to the company’s existing 4G network offering “will increase reliability, increase speeds, and keep our customers connected where they need it most. This is another milestone for the UK and for our network journey – we’ll keep evolving as we move to one, smart network for our customers. We have an ambition to connect our customers to 4G, 5G or Wi-Fi 100 percent of the time.”

The launches won’t cover the whole cities, however, with the initial roll-out concentrating on what EE has identified as the busiest parts of each city – including Hyde Park in London, Manchester Arena, Belfast City Airport, the Welsh Assembly, Edinburgh Waverly Station, and the Bullring in Birmingham. The company has confirmed plans to offer a range of 5G smartphones capable of connecting to the network, alongside a consumer-oriented broadband router with external antenna.